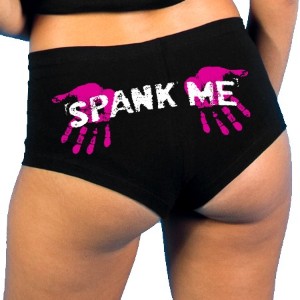 On page one of this chapter, Mr. Grey admits he’s “fifty shades of fucked up.” That’s his excuse for not wanting to be touched.

Ana rolls her eyes at him and he threatens to spank her.

Despite having not signed the contract yet, Ana submits. And so…

He rubs baby oil on her behind.

Ana calls her Mommy all upset and then she’s happy as a lark, despite the sore butt, because Mr. Grey has sent her an email!

He instructs her not to drive her old car again and says he’ll send his personal assistant to get the car and sell it for her. Ana refers to herself as “some woman you fuck occasionally” and boy, he doesn’t like that.

She replies that she’s not sure she likes him because he never stays with her.

Shock…Mr. Grey comes rushing back to the apartment!  Kate tells him he’s on her “shit list.”

Despite her wanting him to just leave and send her another email, he agrees to lay down with her and she drifts into a peaceful sleep.

Mr. Grey slips out of the room and goes and spanks Kate. Just kidding about this last part, I guess he went to sleep too. Or maybe he left to go play Farmville on Facebook or tweet something. Or email somebody, or check Ebay for a riding crop.