Updates from the Fish Room

The “Fish Room” is the space below the stairs in my basement where I now have 3 tanks set up – the two 10 gallons which are the winter homes for the white cloud minnows from my pond, and now the 5 gallon Marineland Portrait tank I set up last week. I will probably eventually add a 4th tank, but I’m not sure how soon. 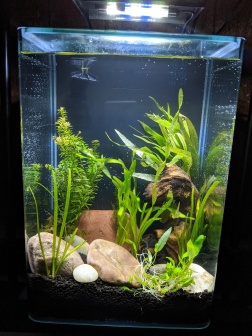 It’s a good thing I set up the 5 gallon last week. I had intended to let it sit and cycle for another week or so and shop for fish next week for it, but plans changed unexpectedly last week while I was out of town.  The low-tech nanobowl with the shrimp in it suddenly began to turn cloudy. John was worried about the baby guppy in it, “a freebie” that had ended up in the bag at the fish store when I bought the shrimp. He suspected the shrimp had also died. I told him he could move the guppy into the 5 gallon. When he went to catch it, he discovered the shrimp was fine so he transferred both and they are doing great.

I’m not sure why the low-tech nanobowl had a sudden change. I had done a 10% water change before leaving town, but that probably wasn’t enough. When I came home, some of the plants looked even worse which leads me to believe it could have been several issues. First, I should have used substrate instead of black pebbles. The plants probably also needed a nutrient boost or at least some fertilizer. 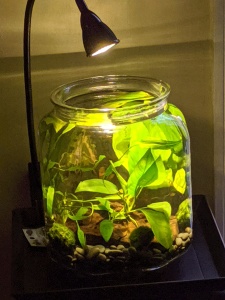 However, I wasn’t really happy with the set up anyway and had learned a few things I’d probably done wrong afterwards. Because of this I’ve decided not to do any more low-tech setups without filtration. Last night I salvaged what plants I could from it, recycled the pebbles by putting them in the gravel on my garden path, and I closed down the nanobowl all together.

I love the little 5 gallon so much. It’s still crystal clear and looks amazing, so I bought another one to go in place of the nanobowl. Due to our small house and limited space, I’ll set it up after Christmas but the tank is due to arrive this week! 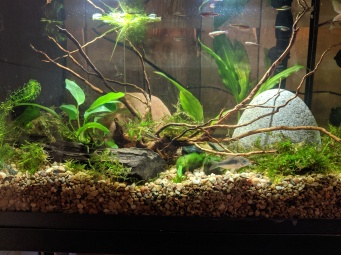 The two 10 gallons are still doing great. The one pictured is the one I revamped last week, adding the spider wood and stones. The 2nd tank could still use some love though as it’s been a hodge podge of plants that I’ve moved around to the other tanks and bowls.

I’m not happy with the lighting on these tanks. The original lights that came with the tanks are plastic hoods with small LED white-only bulbs. I’d probably been okay with them in a pinch and they’ve been fine, but after seeing how bright the LED white and blue lights are on the 5 gallon, I now plan to upgrade both tanks with better lighting. I’ve already bought a new lighting system to test out, but also needed a new glass lid for the tank since white clouds can be jumpers.

And speaking of upgrades, I’m not happy with the filters on the 10 gallon tanks either. Both currently have small canister/cartridge type filters that came with the tanks. They suction to the inside, and not very well. And they’ve never really had good outflow even though the pressure is adjustable. I’m switching to sponge filters instead. I currently have a set-up on order to test on one of the tanks that should arrive next week.

That leaves the 2 gallon nanobowl I originally set up for my desk at work. When I came back to work yesterday, I discovered some of the plants had lost their bright green color. Some searches online for answers led me to believe this is also a nutrient problem. No worries – plant food is on the way! But the water has remained clear thanks to the mini filter I installed. I did switch out the light today for the larger light I had at home on the nanobowl, and I discarded some of the plants that are past the point of no return. I hope to add fish to it next week.

And that’s everything (for now)! So what’s next?

I have the new sponge filter set up, glass hood, and LED light on order to work on upgrading one of the ten gallons. If all goes well, I’ll order a second set to upgrade the other tank. I ordered a few new plants from buceplant.com to fill in the nanobowl on my desk. I’m going to try to stick with low-light plants for now. I also hope to add fish soon. And the new 5 gallon tank arrives this week but I won’t be setting it up until after Christmas. If the baby guppy and shrimp continue to thrive, I’ll probably add a few Endlers to this tank and maybe another shrimp or two.

I’m having a lot of fun getting back into this hobby and learning about proper live plant-care. It’s been a challenge, but it has also been rewarding.

I'm not sure how I made it through 43 years of my life without ever hearing a @john_prine song, but my life changed forever last year when I was listening to @livefromhereapm on @npr and John sang "Summer's End" from his new album. That album was the soundtrack to my life last year. I couldn't believe I had never listened to him before. And I was even more surprised to hear my girl @brandicarlile singing back up on the album. Life doesn't get any sweeter than that. And now this terrible outbreak has taken him away from us, and once again, the music in my life has changed forever. . . . @christhile #johnprine #brandicarlile #npr #livefromhere #music #covid #2020 #summersend
One of my #sparklinggourami disappeared over the weekend. Can't find him in the tank. Can't find him outside the tank. Just gone like a #missingperson. Very weird. I took this video of the two of them last Friday. . . . #aquariumhobby #aquarium #fishhobby #fishtank #aquascaping #aquascape #nanofish #nanotank #tropicalfish #tropicalfishtank #livefishtank #liveplantaquarium
The struggle is real. Found a 4 pack today and felt like I won the lottery. #stayhome #covid @cottonelle
Another video of the #exclamationpointrasboras settling into their new home. . . . #aquariumhobby #aquarium #aquascaping #aquascape #nanofish #nanotank #fluvalspec #fluval #sparklinggourami #tropicalfish #liveplantaquarium
Added some #exclamationpointrasboras to my #fluvalspec today. They are so cute and tiny. I could tell an immediate behavior change in the two #sparklinggourami that have been in the tank for a few weeks. They definitely like having friends around. . . . . #aquariumhobby #aquarium #aquascape #aquascaping #nanofish #nanotank #tropicalfish #tropicalfishtank #fishhobby #fishtank
Took the cover off the pond today and was surprised to find all six of the #roseycheekminnows survived the winter! I added them last September after bringing in all of the #whitecloudminnows. This was the first year I covered the pond. Totally worth it just to see these little guys greeting me today.