Well, our garden’s beauty certainly outweighs the bad spots that need attention, and yes, we have bad spots. So today I’m posting pics of those “bad” spots in our garden that could use a little more love. They’ve been overlooked due to us working on adding so much new stuff this year. But no worries…we’ll get to them.

This first pic is of the banana trees right next to our vegetable garden. Look closely and you’ll see a small border fence around them. What makes it bad is all that grass that’s growing under them. It’s turning brown near the end because I cut it a bit too close with the weedeater on Saturday. We also had to leave this area alone because a mother rabbit had a burrow under the banana trees and gave birth to two babies there (the ones we recently relocated because they were eating everything).  I’d like to eventually add some flowers or ground covering here, but for now, it’s an eyesore of grass.

These are lilies growing under an apple tree. They had a nice brick border back in the spring, but we stole from it to build the rose bed and haven’t replaced them. And we probably won’t. The lilies are too tall. You can’t even see their blooms for the lower branches of the tree. We are thinking of moving the lilies in the fall and putting hosta under the tree instead.

This is an iris garden under the second apple tree. It was beautiful in the spring. This is where all of my yellow iris grow. But now that it is summer, the iris and few alliums have all bloomed and we have no summer flowers here. It’s so blah looking…but we are adding summer flowers when we do transplanting this fall.

This is a spot behind our patio. It’s always been a hodge podge of stuff. We had iris here in the spring which we recently relocated. They did okay there, but being in the shade, they never produced very many blooms. As you can see from the pic, there’s a lot of gaps to be filled in. 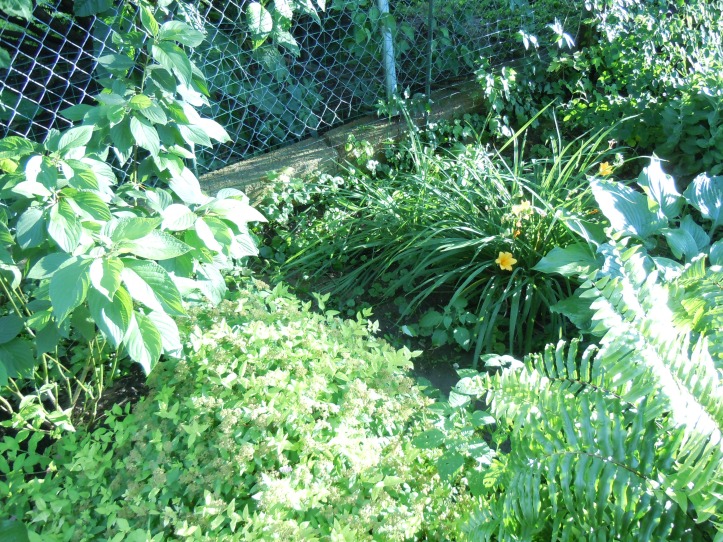 Are there any “bad” spots in your garden that need some attention?