Book Review: The One and Only Ivan by Katherine Applegate

Though each chapter of The One and Only Ivan is only a few sentences, and the book contains a few illustrations, the book is about 300 pages but speaks volumes when it comes to being a heartfelt story of humanity. It is the story of Ivan, a silver back gorilla, raised in captivity as an attraction at a circus themed mall. He is best friends with an old elephant named Stella and a stray dog called Bob. Mack is his keeper. George, the janitor, and his daughter Julia often come to visit.

Like Julie, Ivan loves to draw and paint, and though he is old and not much to look at anymore, his paintings often sell for 40 dollars (with frame). One day, a new promising attraction arrives – a baby elephant named Ruby. Stella makes Ivan promise that he will take care of her and see that she has a happy home, because Stella may not be around much longer. 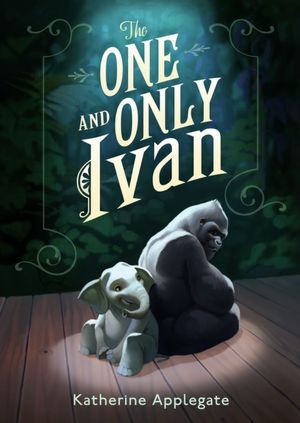 And so begins the story, actually based on a real Ivan, of how a gorilla with so much heart and compassion captures an audience – in the story and also off the page.

Applegate gives the animals each a brutally honest voice when it comes to how they view humans and how they have been captured for our pleasure or even abused. At times, the book is very sad. But it will also have you smiling with tears in your eyes too. I thoroughly enjoyed this book and if it doesn’t have you respecting animals just a little more than before, maybe giving your dog or cat a few extra kisses or treats going forward, then I don’t know what will.

This is a book I will be sharing with others for a very long time to come!

#flagsofvalor #911 memorial at #arthill in #forrestpark #stl #neverforget
Friday morning rooftop goose meeting
The rice fish are still thriving in the pond.
Woke up to find another hyacinth bloom in the fish pond.