Updates from the Fish Room

Basically, I emptied my five gallon grow-out tank (more about that in a bit) and left some moss and other bushy plants in it. Then, I added a few male and female minnows to the tank on Saturday night and let them do their thing! It worked! There was lots of spawning activity, even on Sunday morning. The eggs are hard to see due to substrate in the bottom, but I removed the adult fish Sunday afternoon. Hopefully, I’ll have minnow fry by Wednesday! I’ll post about that next week if it happens. 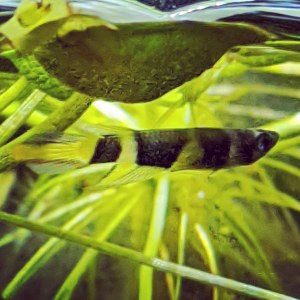 I do have some new additions to the “Mississippi” tank. I acquired 5 Clown Killifish last Friday.

They are super tiny adolescents but there are at least two males who have very defined colors. They are very peaceful fish and it’s nice having them in this tank. “Mississippi” only has Celestial Pearl Danios and Emerald Rasboras in it since I took the Kubotai out last week to put in the tank at work.

The Danios and Rasboras constantly stay hidden except for when you are feeding them, and even then you only catch a glimpse of them because the tank is heavily planted and they do not come to the top. Here is a photo of the “Mississippi” tank, and you can see a few of the Clown Killifish at the top right: 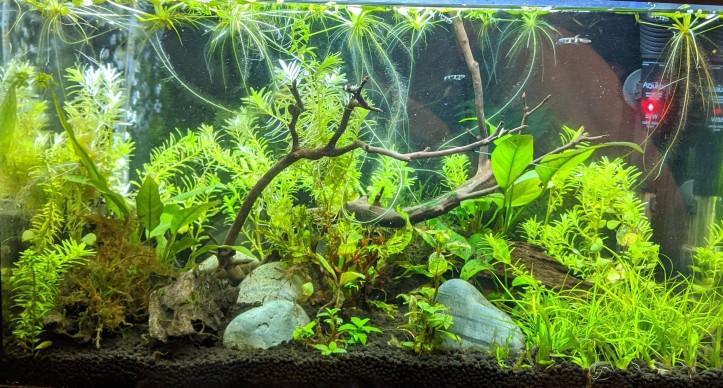 I mentioned above that I emptied out my grow-out tank. This was a five gallon Marineland Portrait that I had been using for cuttings and plants taken out of other tanks. Most of the plants had grown enough foliage that I decided to move them into what was the “Riverbend” tank that I closed down a few weeks ago which was also a Marineland.

Riverbend was the endler and shrimp tank which I upgraded to the 15 gallon Fluval Flex, and it is doing very well. The old 5 gallon now looks like this:

I plan to add some chili rasbora to it this week just to have something in it. I kept the Mopani wood that was in the Riverbend tank. All of the plants came from the grow-out tank except for those giant java fern leaves which were a clipping from another tank. I capped the substrate with sand, which I wish I had not done now because as you can see when you are planting, some of it comes to the top anyway and it reminds me of Oreo cookie bites. Oh well…

Lastly, the new Fluval Spec 5 gallon tank on my desk is doing well. The female betta had lost her red coloration and appeared more blue when she was in the old bowl. Now, she’s turning red again so hopefully that just means she’s happy?

The Kubotai are doing well too, and I actually found three more that I’m going to add this week.  Some of the plants are being finicky and may have to be replaced, but we’ll see what happens. When I first added the Kubotai, I noticed they were schooling which they had not done at home. I decided to put a sponge over the water outlet to slow down the flow a bit and that seemed to help. They immediately went back to shoaling.  Here’s a pic of the tank from last week: 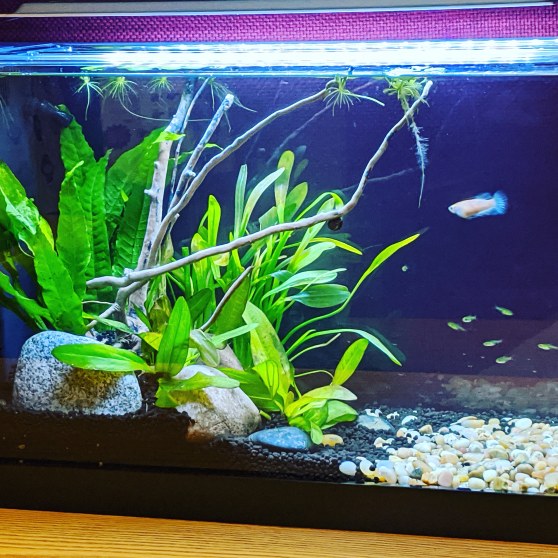 Baby shrimp born last week! The second pic is a view of their tank from above.
Snow Day. ❄️ #stl
No filter needed on the endler tank.
Spotted my little crayfish tonight. Haven't seen him in about a month. He's grown a bit. Anyone know what kind he is? I got him last year mixed in with some amano shrimp.
I love tanks that have bonsai tree scapes. I never intended for this tank to look like it had a bonsai scape.
Probably my favorite scape. These are half of the white cloud mountain minnows born in the pond last fall. This tank was set up to be their winter home. I'm hoping to eventually get them to spawn indoors.