Last week, I posted some updates from the “fish room.” I’m happy to report that some of the upgraded equipment I purchased online arrived over the holiday weekend, and I’m very happy with all of it.

The first improvement was this glass hinged lid for my 10 gallon tank. I only purchased one because I wanted to try it out first. The reason for the glass lid is because I also wanted to update the lighting to a better, brighter LED light. The current lid was a plastic one-piece lid with lighting built in, so it would have to be completely replaced. The existing lid was okay. It came with the tank, but once I got the new 5 gallon tank with its super-bright LED light, it made the light on the 10 gallon look dim and yellow. The new glass lid was a perfect fit.

The new lighting system was my second purchase. Again, I only purchased one to test it out first. Not only is it super bright, but it has different settings to make the light dim or extra bright. There’s also different color options (red, white, or blue light), and it has a timer that can be set to shut the light off after 3, 6, or 12 hours. Wow! What a difference! Check out the photo above of the tanks side by side. I’ve already purchased a second lid and light system for the other 10 gallon.

The second Marineland 5 gallon arrived last week too! It was intended to go upstairs in the dining room after Christmas to replace the nano-bowl, but a good Black Friday deal changed that. I had mentioned to John about how it would be nice to put all of my white cloud minnows together in one larger tank. He thought that was a good idea too (he’s slowly been getting interested in the fish), so I went online and started shopping for a 20 gallon tank. 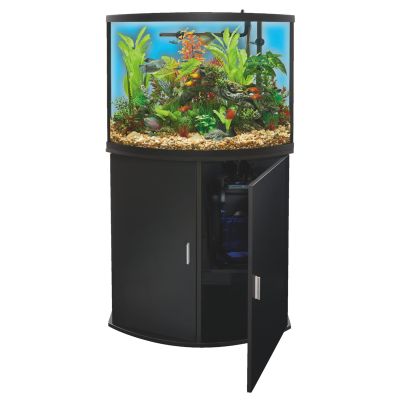 I wanted something different since I loved the Marineland tank so much, but couldn’t find anything in a 20 gallon. I even checked the marketplace on Facebook and found a local person selling a basic tank and stand. It was tempting, but I kept shopping. I’m glad I did! PetSmart had a great Black Friday deal for a 36 gallon Top Fin Bowfront Aquarium & Stand Ensemble. It was just $125 for the tank and stand, so I bought it! I’m glad I did. It’s now up to $179 for Cyber Monday, regularly $249! I got a steal!

So I picked it up on Friday evening in the rain. We unpacked it yesterday and it looks amazing. It’s waiting in our spare bedroom and will be moved into our dining room once the Christmas tree comes down. It will be the home to all of the white cloud minnows from the pond. There are about thirty. I will also add the cory cats from both tanks.

On Friday, we did make a trip to one of my favorite fish stores to buy a few Endler Livebearers for the 5 gallon and I found two pieces of spider wood that I purchased for the new tank. As for the Endlers, there were only a few left and I felt bad about leaving any of them behind so we took them all. We got two males and one female, and they gave us two babies for free. I also bought two tiny panda corys which I put in the Endler tank, and I bought another albino Cory for one of the 10 gallons.

I lost the albino cory that was in the 10 gallon last week because he got stuck behind the cartridge filter. I hated these filters from day one and wish I had replaced them sooner. The new bio sponge filter I wanted to test out arrived this weekend as well and it looks great in the ten gallon. I watched some YouTube videos to learn how to upgrade it with an airstone, and it worked perfectly! It was super easy to install, and no fish will get stuck behind it. I’ve already ordered another for the other 10 gallon!

What’s next?  Well, the new lid, new light, and new biosponge filter for the other 10 gallon are all on their way. There will be plants and substrate and filtration to buy for the new 36 gallon after Christmas. I won’t be shutting down those 10 gallons though! One will probably become a fry tank for future Endler babies. The other will become home to something else. The possibilities are endless.

There’s still the nano-bowl on my desk at work. I have new plants that arrived yesterday in the mail from Buce Plant for it. And I’ve got a Cyber Monday coupon for some fish that I hope to put to good use tomorrow! More updates to come!

The pic below is the 5 gallon which is the home of the new Endlers we got on Friday. There are two males, one female, two new babies, and the baby we already had. The last shrimp is in there too, and the two new panda corys. Some of the plants aren’t doing so well so I’m adding nutrients to the tank and hoping they’ll improve. Look close and you can see the 3 adults and 2 of the babies at the top. You can also see the shrimp at the bottom right just above the rock in the corner.