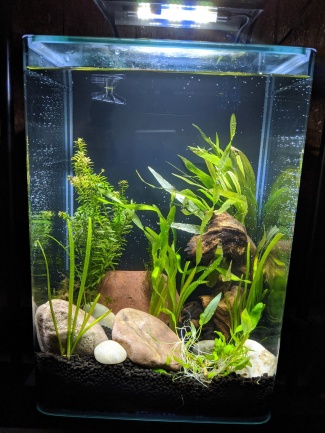 I posted last week about investing in ANOTHER nanotank. It arrived last Friday and I had a great time setting it up yesterday.

I chose the Marineland Portrait 5 gallon because of its seamless shape and size. This tank is cool because it has a hidden space in the back that’s about two inches wide that hides the built-in filtration system. That being said, the set up of the filter system has some flaws, but I was able to work around those and make some improvements thanks again to watching some YouTube videos. There’s definitely room for improvement to its design, but the tank would be great for beginners so I’m not going to dwell on its imperfections. I wrote about those in my Amazon review if you want to read them.

The water pressure is adjustable which is nice. The tank also comes with one filter cartridge and a small square piece of bio sponge. The light has two settings: white light or blue. The blue setting would make a great night light. Overall, the tank is easy to set up and it only took me an hour. Most of that time was spent adding the plants and rocks.

I used Fluval Stratum in this tank. I can honestly say I wish now I’d put this stuff in my ten gallons! It’s amazing and I can’t wait to see how well the plants do because of it. After a few quick rinses to remove the dust, I put it in the tank first. I used a 4 lb bag for this tank. 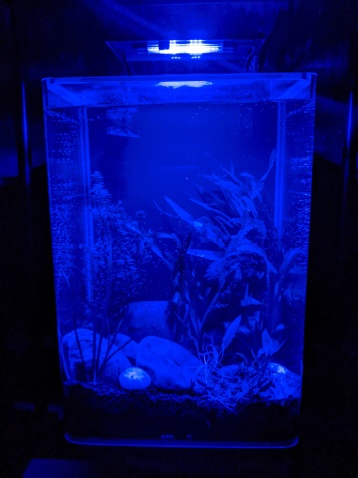 Sunday night I had done a quick Google search of St. Louis to find local non-chain tropical fish stores that maybe I haven’t visited. I found one called Aqua World and decided to scope it out yesterday morning for live plants. I was not disappointed! The staff here was super friendly and knowledgable and they had a great selection of plants I had not seen before. I bought 8 plants total including some tall spiraling grasses. Sorry, I’m not good with remembering plant names. I also bought some large river stones.

The spiderwood I bought last week was too big for this tank and I didn’t want to cut it, so I removed a piece of Mopani wood from one of my ten gallons and used it instead. I added three large river stones that I bought and then a few smaller river stones that I already had.

The tank looks amazing and I’m really happy with it. Not sure what fish I’ll add just yet, but I’m leaving town tomorrow for the rest of the week so there’s time to decide while I let the tank cycle.

I had thought about buying a second one to go under my other ten gallon, but I think I want something a little bigger. After filling this tank with stones and plants, it’s super tiny and it wasn’t very big anyway. I’m not disappointed though and I think it’s a great addition to my fish room.

Oh, I almost forgot to explain the title of this post! At the fish store, I picked up a free copy of a magazine called Aquarium Hobbyist. Throughout the magazine, they feature other reader’s tanks and they all had names for them. So I had to name mine too!  I’m calling it “River Bend.”