The Lonely Alone: Part 5 – The Longest Distance Between Two Places

When so many are lonely as seem to be lonely, it would be inexcusably selfish to be lonely alone. –Tennessee Williams

I know what you must be thinking. It seems only predictable that I’d also write about Tennessee Williams and the profound and unsurprising effect he’s had on my writing. After all, he was another gay Southern eccentric who had a drinking problem and wrote his best work when he left the South. I’ll be the first to admit that’d be an accurate prediction, but remember Williams was my first exposure to Southern writing back during drama class in high school. His repeat performance in my Southern Literature class was necessary given respect to his body of celebrated work. 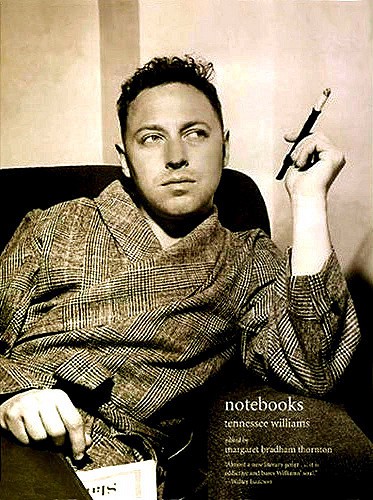 Right after I finished that course, I still knew little about Tennessee Williams himself until a retired professor friend sent a book to me called Tom: The Unknown Tennessee Williams by Lyle Leverich. This book had over 600 pages in it and I remember starting to read it, but I gave up very quickly. I just didn’t care much for biographies (I still don’t). Remember I still had not read the Capote bio yet. I kept that hardback copy of Tomthough, determined to read it some day. I firmly believe the book chooses the reader when it’s time to be read. And that’s exactly what happened fifteen years later.

Williams was born in Mississippi, spent time in Memphis visiting his grandparents, but was raised in St. Louis after his family relocated there when he was eight. He enjoyed publication at the early age of sixteen when a winning essay was published in Smart Set magazine. Much of his popular work and his best-known characters were inspired by his time spent in St. Louis, and some of his plays are even set there.

I’ve never considered St. Louis to be part of the south. As soon as I moved to the city, I immediately knew I was in a place very different than the muddy Mississippi river town of Memphis. The people were different, particularly the way they spoke and interacted, their local cuisine, and their general attitude toward strangers. One of Williams’s famous or more memorable lines from Streetcar was, “I’ve always depended on the kindness of strangers!” It’s no surprise that this play is set in New Orleans and not in St. Louis as I’ve never met any strangers I’d want to depend upon in this town. So what was it about Tennessee and his writing that made him Southern, other than his own personal background?

The most obvious would be his pen name: Tennessee, chosen because it’s where his grandfather was from. Tom had fond memories of the south and loved spending summers with his sister Rose visiting his grandparents. And the first time he traveled abroad was with his grandfather. So, we see this reoccurring distance between a young man and his parents, and there was certainly other upheaval in the Williams household. His rather abusive father drank and spent much of his time away from home as a traveling salesman. Tom had suffered from diphtheria when he was a child so he was very frail and also fell victim to his overbearing mother who focused all of her attention on him.

Meanwhile, his mother attempted to be quite the “Southern belle” type, frequently relocating her family around the city, always in search of a finer home and in-crowd. Rose was diagnosed with schizophrenia at an early age. As her behavior grew almost to the point of disturbing, her parents agreed to commit her for a frontal lobotomy that went horribly wrong. Williams also struggled with sexuality early on, but accepted his homosexuality in his early twenties. It’s quite obvious to see why Williams’s dysfunctional family would lead him to a life of heavy drinking and an addiction to pain pills.

Tom loved to travel and did so extensively, spending a lot of time south of the border or overseas. He eventually spent much of his time and career between New Orleans and Key West. I have visited New Orleans twice and felt an immediate connection as a writer. Like Carson, Truman, and many other great writers before me, Tennessee longed to escape the clutches of his hometown upbringing fast, and his successful career as a playwright allowed just that. So, it is extremely ironic that St. Louis would become his final resting place despite his wishes to be cremated and buried at sea.

In November 2008, I made my first trip to St. Louis’s old historical cemetery, Bellefontaine. When I lived in Memphis I frequented the old cemetery there known as Elmwood, often with a 35mm camera in hand for snapping black and white photos of all the statuary. Morbid? Perhaps. But death and funerals have also played an integral part in Southern literature. I’ve always been comfortable in graveyards and have enjoyed the history. Themes of death play a very important part in my third novel.

I had read online that Tennessee Williams was buried in Bellefontaine, so I was anxious to find his memorial. I left the cemetery that day with lots of great photos, but Tennessee remained unfound. I scoured the web for photos of his marker when I returned home, only to learn that he was actually buried in a different cemetery, known as Calvary, across the street from Bellefontaine.

I would not return to the cemetery for two years. But in the winter of 2011 when I made the trip back, you can certainly guess who I wanted to find first. I remember the temperature was almost 50 and I was only wearing a light jacket. There were also the remnants of snow on the ground from a snowfall that had happened a few nights earlier. Near Tennessee’s tall pink-hued marker were a set of boot tracks in the snow leading up the hill behind him. Someone had already paid him a visit.

Faded silk flowers lay at the foot of the marker, perhaps a token left by the person who was now just an imprint upon the snow. I said a silent prayer and snapped a photo, taking a moment to reflect on the great writer who lay beneath the frozen ground before me. Sister Rose, who outlived her brother by thirteen years, was buried at his side. And in the distance to the left, their mother Edwina’s gravestone stood just as tall, but facing away. Perhaps it was irony, or just me seeing it that way since I now knew more about their home life.

A year later I returned to his grave on the anniversary of his death. This time I was seeking inspiration. After a fan read my second novel, she brought up an interesting notion that she wanted to know more about the secondary character and his background or where he was now.

I’d never dreamed of writing a sequel to any of my work, but a concept clicked in my head and the muses started talking. And then in walked Tennessee Williams. He became a part of the story, or his ghost at least. So, I revisited his grave and then I picked up that biography I’d been holding onto. Now was as good a time as ever to read it and learn about my new muse. I was saddened to learn that the bio was meant to be two books, but Lyle Leverich died before completing the second volume.

There are many film versions of Williams’s plays. We’d watched A Streetcar Named Desire starring Marlon Brando back in my Southern Lit class. Along with it, I bought several more of them to feed my new fascination by him. My favorite is the 1973 version of The Glass Menagerie with Katharine Hepburn as Amanda, the domineering incoherent mother. This work was clearly a personal reflection of the Williams home after Tom’s father left.

As Tennessee’s world came alive to me, suddenly I didn’t feel like a visitor in this town anymore. I could walk the streets where he walked, envisioning the way they must have looked to him back then. I could write about new places, and not feel like Memphis was haunting me for leaving it. It was then that St. Louis became a part of me, though it will never be home.

Our sweet Elmer held on long enough for one more Halloween. Rest well, my sweet friend.
Join 1,842 other followers