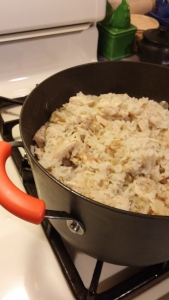 We had a rough week last week with the passing of one of our furry friends. With Thanksgiving coming up, we finished up our holiday grocery shopping over the weekend and then spent the rest of the time cozying up at home with our other pets while trying to deal with our grief as best we can. So we were in desperate need of some comfort food.

We also spent a lot of time watching several old episodes of A Chef’s Life from season 1 and 2 over the weekend. In Season 1, Episode 8, Vivian gets her mom to show her how to make her Grandmother Scarlett’s Chicken and Rice. Later in Season 2, Episode 4 and 5, Vivian makes the recipe again for the Southern Food Alliance lunch she and Ben traveled to Oxford, MS for where Vivian honored the women in her life by making their recipes.  Her parents also went to the event so it was very special for her. It is such a simple recipe we decided to pick up a chicken on Sunday and make it for ourselves.

My original plans were to follow her book, Deep Run Roots, straight through but since it’s November and the next section of the book is about watermelon, I’ve decided to skip around because most of our farmer’s markets are closed this time of year here in St. Louis. I don’t want to buy a watermelon from the grocery store out of season. But that’s okay because there are some winter root vegetable recipes in other sections that I should take advantage of this winter. Vivian is a strong believer in honoring what’s in season.

Her chicken and rice recipe is in the rice section on page 290. Rice was not a staple at our supper table back home. We got our starch from potatoes which were served at almost every supper. Honestly, I was probably first introduced to rice through a Chinese restaurant, or as a side item in a restaurant like Applebee’s. I’ve had chicken and rice before but not really sure where. Uncle Ben’s 90 second rice pouches could occasionally be found in my pantry until earlier this year when I began my Sunday meal prep routine for the week. It was then that I started buying bags of long grain rice because it was convenient to make a large batch for us to have all week.

Even Vivian admits that rice is not always easy to make. She panics a bit while preparing for the luncheon because she isn’t sure about the timing. She doesn’t want to make it too soon because it will have to sit and get sticky or the grains might split if cooked too long, but if she makes it too late it might not get done. Oh, and having to make enough rice for 400 people is not easy! I’ve definitely overcooked it or not cooked it enough before and that’s just for two of us.

As for chicken, back home it was always fried in Mom’s cast iron skillet, or was served fried at lunch at school. For holidays or other special occasions, fried chicken was very crispy and came from a red and white bucket with a picture of the Kentucky Colonel on the side. I also ate my share of chicken nuggets or chicken “fingers” from restaurants as a kid, and I still crave a good chicken sandwich today. Chicken is my first preference when it comes to meat.

It was only about 12 years ago when I first started learning how to cook that I made boneless baked chicken breasts with lots of seasoning. This led to a casserole-type dish where I put cheese, cream of chicken soup, and Stove Top stuffing over the baked chicken which is very yummy. A few years ago I came up with my very own recipe for white chicken chili, but I used a store bought rotisserie chicken that’s already cooked. 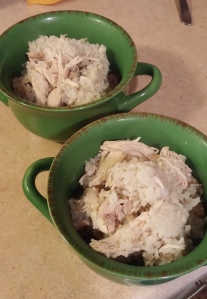 I’ve still never attempted frying it on my own, and have certainly never cooked an entire chicken before. I don’t know why but those things seem scary until I actually just try doing them. I think that’s why kids are sometimes afraid of trying new things. At least, that’s how I feel, and then I’m kind of shocked at how easy they really are so I’m glad I did it. That’s exactly how I felt when making this recipe. I was amazed at the simplicity of it and won’t be afraid to try cooking with whole chickens ever again.

Vivian loves taking a recipe and making it her own, so we kind of did that with this one.  We added some fresh mushrooms, but other than that, we kept the original recipe the way it was intended. I can’t wait to head home next month and make this for my mom! It was so good and we’ll definitely make it again. It makes a large pot so there’s plenty of leftovers when you are just cooking for two.  I had it for dinner last night and plan on having it again today for lunch.

Ooooooh! Weeeee! If you ain't drankin' dis you ain't drunk yet. @chrissysbuck you tried this yet?
A lazy Saturday. #dogsofinstagram #saturdayvibes
I love you more than my luggage. This one really hurts today.
I added a few #medakaricefish to the tub this morning. Spring is finally here! @msjinkzd
First iris of the season.
I heard a Who this morning, @lannybis