Cleaning out the closet…

We live in a small house with small closets. I have the “luxury” of having two closets, but it’s far from being an actual luxury. A tiny coat closet in the dining room holds all of my pants. It also holds our bath linens.

The rest of my clothes are in a somewhat larger closet in the office. Yes, it’s still too small to hold the clothes that are in the other closet. Weird, I know…  If our basement was finished I’d probably keep all of my clothes downstairs.

Anyway, the bottom of the pants closet has served as storage space to some of my personal belongings: photo albums, letters, banking statements, paper manuscripts, research files, and a plethora of paper handled bags.

I decided I was going to clean out this storage space this weekend so that’s just what I sat down to do today. I started by pulling out all of the paper bags. There were gift bags from birthdays and Christmas and bags from any retail outlet that gives out a nice paper bag with handles that I had shopped at since 2006!  I always feel like I’ll reuse it and I hate to throw away a nice bag, but obviously I don’t reuse them as much as I should so they all went into the recycling bin today without a second thought. 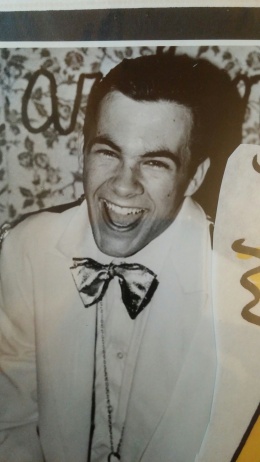 I had fun flipping through some old photo albums and looking back at days and friends gone by.  I also found numerous film negatives, still in their little plastic envelopes from the photo developer.  I kept a few just for nostalgic purposes and threw the rest away. I grabbed my phone and took snapshots of a few old photos of myself and my grandparents and immediately shared them on Facebook because they made me smile. One such photo is the one of me to the right.

I am 16 years old in this photo.  It was taken in the summer of 1992 as a cast photo for a production of “Hello Dolly!” staged by the community theater group in my home town that summer. It was custom to take photos of each cast member and put them on a bulletin board in the lobby for the audience to see as they came in. The photos were always black and white and they were either head shots of us wearing black tee shirts or we were in costumes and in character.

I played “Rudy” who was the head waiter of the Harmonia Gardens Restaurant. It’s a small role, and a bit upstaged by Louie Armstrong in the Barbra Streisand movie. It’s a very serious role and the director had me blow a whistle to call my waiters to attention in the restaurant scene. I also spoke with an accent. I took a serious photo with a smirk on my face and the whistle held up to my lips which actually made it into the local newspaper, but it was this “fun” photo that made it onto the bulletin board. The photographer was my best friend at the time and asked me to do my “Joker” face. But, yes, those are my real eyebrows!

The photo took me by surprise and made me laugh.  Ahh, youth and to be young again. It’s funny because I can still remember my opening monologue from my big scene. And I remember the fun I had and the friends I made as we staged and rehearsed the production that summer. I never did another play after leaving town in the summer of 1995, but those years I was involved in community theater were great.

I took a new photo of myself today just for the heck of it. You see, I’m usually the one behind the camera and I rarely take selfies. I am the camera. I even wrote a book about just that back in 2008.

And that’s a sad place to be in this digital age where there are no negatives and no photo albums to preserve those moments that made us smile. All of our photos are on our phone. I’m guilty of that too. Lose your phone and you’ve lost your history, and I’m not talking about texts or contacts. I’m talking about birthdays, track meets, Christmas, graduation, prom, anniversaries. Your Kodak moments are all there and digital and unless you post everything to Facebook like some people, they are easily lost.

It’s scary to think how convenient it is and how dependent we are on technology these days, but if the grid is wiped out it’s all gone.  All we have left are the photo albums and developed photos from the 90’s and before when one hour photo was the convenience and Mark Zuckerberg was in grade school.

Once the closet was clean and the trash was taken out I sat down with Ward’s letters and put them in order by date and read a few of them. I realized I have no photo of him, but that’s okay. I have the letters and I have memories. And those are better than nothing.

As for that photo of me, God, I look old. There’s a good reason I don’t take photos of myself right there!