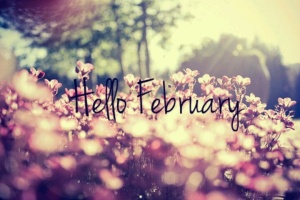 Well, that was fast, wasn’t it?  Here we are again. It’s a new day. It’s a new month. And it’s my second blog post devoted to my Four Goal New Year’s Resolution list.

Since I was just getting started back on January 1st, I spent a lot of that post talking about saving money. I won’t do so much of that in this post, so let’s recap how I did in January instead and then move on to the next topic. Here are my savings accounts I’m tracking and their current totals:

You’ll notice I added two more accounts to my log. I had forgotten about iBotta which is an app I installed on my phone last year.  You earn money back when grocery shopping by buying certain products. The minimum to cash out is $20 and I had not earned that much last year. But I just reached the $20 goal in January! I’m not going to cash out yet so I thought I would start including that each month as a savings account.

Receipt Hog is a new app I just downloaded in January. It’s basically the same thing except you earn coins by uploading any receipt. You don’t have to shop specific places or buy certain items. Any receipt will earn you coins.  About 1000 coins equals $5 so this one will take some time but I really like it because if I can’t redeem anything on iBotta when I’m shopping, I can still utilize my receipts to earn money from Receipt Hog.

Unfortunately my primary savings, primary money market, and cash savings didn’t grow much because I did have to dip into those just a bit in January, but that’s okay. I like having the petty cash for that so that I can stay out of the bank and also not use credit. About a week ago the cash savings was at $65 but I used quite a bit of it to buy vinyl records. 🙂 The Cap One Money Market grew thanks to my automatic deposits, and like I said last month, that account is kind of out-of-sight and out-of-mind so it’s not as tempting to use.  It’s also the main savings account I’ve used the past few years. I’m also utilizing my credit union savings account more than ever now so I’m happy with that progress.

February will hopefully end with a nice increase thanks to my tax return so wish me luck!

Unfortunately I don’t have any good firm progress to report under health as far as actual weight loss goes. January was more about getting in the right mode and getting back on track. It’s also hard for me to exercise in the winter because I like to bike or take walks outdoors, but I don’t like doing it in cold weather!  And there’s still too many sweets in the house left from the holidays.  Excuses, excuses….I know… Here’s what I did do though…

I was loyal to recording my food every day on the My Fitness Pal app.  It’s all about accountability! I also lowered my daily calorie allotment just to get myself to cut back some and get accustomed to eating less. And I started using my free weights again just for some upper body conditioning. I assembled my stationary bike stand that I got for Christmas!  BUT I need an air pump so that I don’t have to get my bike out and take it to the gas station to pump up the tires! So indoor biking will definitely be happening this month because I bought a bike pump last week.

Remember me blogging about Amelia Freer and her book and how much it inspired me last year? Her cookbook was released just two weeks ago.  I read the entire thing in just a few days and it was a big help. Definitely a positive way to get started. I highly recommend it.  Amelia talks a lot about our relationship with food and how we don’t have to diet; we just have to work on that relationship.  I like the sound of that and it’s really helped me with the way I approach weight loss.

The problem for most of us is society. Society often dictates how we should look, how much we should weigh, and what we should wear. Society also shows us everyone hitting the gym and dieting once the new year starts.  There are gym advertisements everywhere you turn right now! So we starve ourselves or spend hours on the treadmill because we think we have to lose X amount of weight in X amount of time.  In doing so, we get frustrated because we don’t get the results we want quick enough, and because we are hungry!

Amelia’s approach is to take it slow and make slow changes and enjoy it as you go.  You don’t have to fast or only eat salads and protein shakes. You don’t have to spend hours at the gym. You also need to block out what society is telling you and really set modest attainable goals.  And in making those goals, you need to make them for yourself!  Listen to me preach, right?  Easier said than done, right?  I’ll be the first to admit that yeah, I’ve rushed to the gym on January 1st before just like everyone else.  I wanted to lose weight. I wanted to shed the excess pounds around my waist. I wanted to build muscle.  I wanted to be attractive when I looked in the mirror.

But it’s taken years for me to really figure out that’s not what I truly want anymore. And just within the last year, probably since last March, have I really found a routine that works for me.  See…it’s a slow process.  Sure, I still want to lose weight and slim my waist and build healthy muscle, but I just want to look in a mirror now and be happy with what I see – both inside and out. I haven’t set a drastic timeline. I’m not starving myself. I’m just taking it day by day and I find I’m enjoying that journey much more now than I ever did when I tried weight loss before.

Yeah, I definitely slipped a bit during the holidays.  But like I said, January was about getting back on track and getting back into the mode. More about my weight loss journey in another post this month!

I wish I had good solid progress to report with my writing in January.  I mentioned starting a new project and I did. I was loyal to it the first few weeks. I even recorded my word count on my calendar like I love to do.  It stops at just over 3000 words back on the 18th, and I didn’t write anything else the rest of the month until two days ago. Sad, I know.

The problem is that during this early stage I often discover whether or not a project is the current one I should be working on.  When I wrote Dickinstein, I pounded out the first draft (about 75K words) in just 8 weeks. That story wanted to be told. Prior to that I’ve written books in about 3 months, and once I wrote two books in one year.

But if I can lose focus on a project and skip a few days without even thinking about it, much less even opening the file and reading it or editing it, or writing on it, then I know it’s not the story I need to tell right now.  No matter how much I was excited about it in the beginning. And unfortunately there’s been a lot of those in the last three years since I wrote Dickinstein.  Yep, I wrote it in 2012 and haven’t finished anything since.

I still want this year to be the year I write my next book, but it’s not going to be the one I was working on in January.  And that’s okay. Just like I said with my health goal, January is about warming up.  I did write at least, but now it’s time to focus on a different writing project. So I’m not giving up yet.  It’s too early.

During the last week of January, I started thinking about an old project I had been working on last year.  I decided to open the file and read it, and I actually liked what I had written. So I started working with it again just this past weekend. Here’s hoping the momentum keeps up. I have about 1500 words written on it so it’s very very new.  Here’s hoping February will be a good month for writing.

So here we are!  As I like to say, it’s a new year, it’s a new month, it’s a new day!  I’m not unhappy with January. As I said, I’m warming up.  I wish the weather would too. February is the shortest month, but still one day longer this year so let’s you and I both make the best of it.  How did you do with your new year resolution goals last month?

See you back here on March 1st!