Well, we’ve got one week left to the year so it’s time to start thinking and planning. I always tend to set a New Year’s Resolution that I’ll track here on my blog. It’s usually weight loss. Isn’t it for everyone? And like everyone else, I usually abandon my goals by spring, or I stop tracking them at least.

This year my life was changed after reading Amelia Freer’s book, Eat. Nourish. Glow. I still practice a lot of her suggestions today and have since I read the book back in March.  She has a new book due out in mid-January that I’m already looking forward to.  If you are looking for good advice about dieting and eating healthy, I highly recommend her!

I have also blogged a bit about using the free app My Fitness Pal. I still used it quite a bit this year, even making it to a 52 day streak before I stopped right before the holidays. It’s a fun way to keep up with your calories and exercise, and I find that it does help keep me on task when I’m focusing on eating healthy. I blogged about my morning walks which I miss! The winter months ended those for me though it hasn’t really felt like winter lately.

So yeah, my health will be a focus again next year but I’m not going to blog about it as much. I plan to roll it into a bundle of things I’m going to focus on and blog about together. 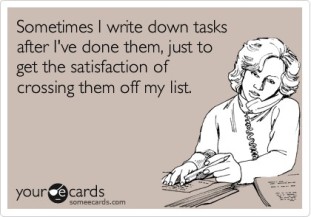 A few weeks ago I became intrigued by list making. I’m a list maker and nothing beats the satisfaction of crossing things off a list whether it’s just a grocery list or errands. I thought about making this a blog focus but as I told a friend, do readers out there really care about me scratching “change the kitty litter” off a list each week? So, instead I’m making one list for the blog focus which I’ll get to shortly.

Lots of people focus on money each year. I wish I didn’t have to. It’s quite a burden at times because, like everyone else, there usually isn’t enough! I always attempt to save some, usually just for Christmas, but that doesn’t always work out because, like I said, there’s never enough. So why blog about that? Eh, put it on the list!

I’ve done pic-a-day challenges and reading challenges too. None of that next year other than my plans to use Facebook less and Instagram more. I’m just ready for a change. But no reason to blog about that here since Instagram is kind of like a blog already. I cross-post a lot of my Instagram to Twitter so you can follow me there if you want. 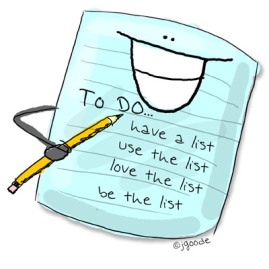 So, now let’s get to my plans for 2016. I plan to wrap all of my goals together into one list and rather than blog about them separately, I’ll blog about them together. So let’s start with that list…

That’s it! Four things to focus on. I can certainly think of other things, but those will happen anyway like gardening or cooking and such. Things I like to do already. So four goals…blog, money, health, write. That’s it. I can do this!