It’s been a busy holiday season for me!  I’ve been busy building houses…putz houses that is (also called glitter houses)! These are miniature “train set” size houses that I make from old greeting cards.

I picked up this hobby in 2013 and made a few which I ended up selling to a friend that first year. Last year I made twelve houses and gave six each to my sister and mother as a Christmas gift.

This year mom and Sis will each get another six to add to their collection. And I made another six for an aunt who also liked, and I have a coworker friend who wanted a few.  So that makes just over 20 houses I made for this season!

That may not sound like a lot but it can take a few days just to complete one house. I usually start by tracing a house on the cards and cutting it out.  This usually takes thirty minutes to an hour depending on how complicated the house is and how many parts it has.

I then glue the house and let it sit while I cut out another. I often do this each night through the week. By the weekend, I have several houses ready to decorate with glitter, bottle brush trees, and figurines.

My biggest problem this year was finding new patterns so I didn’t repeat the houses I made last year. I made a few from scratch including a barn and a castle. I use graphing paper to make the pattern. This is the easiest way to make sure all sides line up, but without a protractor most of the roofs are just a basic 45  or 90 degree angle. So I bought a protractor this year so I can make sharper angled roofs without having to rely on the lines on graph paper.

There are several websites online devoted to traditional putz houses where I’ve picked up patterns in the past. Pinterest is also a good source, especially if you search for “paper house patterns.” I have a Pinterest board devoted entirely to putz houses, mostly consisting of other images of completed houses that people have shared which I like to look at for inspiration.

This year I searched several antique malls again to find miniature figurines and trees to decorate the houses. Last year I purchased quite a few from Etsy shops.

You can get lots of trees on Etsy at good prices, along with vintage style cupcake toppers which make for nice decorations outside of the houses.  I had lots leftover but I still wanted new stuff so that Mom and Sis don’t have duplicate looking houses.

You’d be surprised how hard it is to find those Department 56 style porcelain figurines nowadays. Years ago they were everywhere – even in dollar stores. Not this year! I got lucky and found a few bags of them in consignment shops a few weeks ago. I scored one bag of eight figurines for just $2.50. 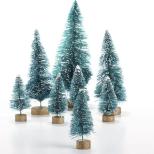 Hobby Lobby was also a good source for miniatures this year. They have a nice mini-tree section filled with tiny ornaments. I bought tractors for my barn, toy soldiers for my castles, some snowmen, and some whimsical cats.

I also like to buy larger bottle brush Christmas trees here because they stock them year round in the dollhouse section. All Christmas was 50% off already on the weekend I shopped here so that made it even better.

I also made a few houses with cardboard flatties this year.  These are small flat characters that are cardboard. If I found characters on the greeting cards that I liked, like a snowman or a child with a sled, I carefully cut them from the card and left a flap on the bottom that could be folded and glued down so they would stand up.  They lack dimension but still add character to the houses.

I did not have to buy cards this year though! I had plenty leftover from last year thanks to people giving them to me and thanks to after-Christmas sales where I picked up several boxes at dollar stores. It takes 2 to 4 cards to make one house, depending on the size.

If it’s a small house, I can get the walls from one card and the roof and base from another. If it’s a larger house with multiple pieces it can take two cards just for the walls, another for the roof, and another for the base. Sometimes I use different cards for bases just so they don’t all match and also to use up a single leftover card.

So what’s next now that this year’s “house gifts” are done?  I love to continue making them into the winter months sometimes. And some friends have told me I should try selling them. I’m not sure how well they do online and places like Ebay and Etsy charged listing fees.

I’d really like to get them into a consignment or gift store. So that’s my next venture!  There are several places near St. Louis like Old Main Street in St. Charles or even Kimmswick that have gift stores where I think they might do well. It’s just a matter of reaching out to the owners to see if they are interested.

I’m also thinking of creating a separate blog devoted just to putz houses. Like I said, there are already some out there that are all about the traditional-style glitter houses so I’d like to maybe start a new approach. We’ll see what 2016 has in store!