Called Back… The Last Days of Emily Dickinson 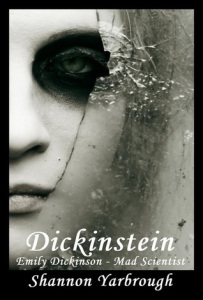 Two years ago this month my fourth book, Dickinstein, was published. It’s a gothic horror mash-up blending the life of poet Emily Dickinson with Mary Shelley’s Frankenstein. To celebrate, Dickinstein is free this weekend on Amazon Kindle.

My current publisher contract for this book ends on October 26th. At that time, the current paperback and Kindle edition will go out of print. As of right now, there are no plans for a new edition.  I also do not plan to self-publish it.  The book will indeed be out of print indefinitely. I’ll explain why.

In a way, I’ve been haunted by this book from the very night I completed it. The book practically wrote itself. I started it in the summer of 2012, all while researching the life of Emily Dickinson.  I became so wrapped up in the story that I finished the first draft in just eight weeks. As any other writer or author can tell you, that was quite an exhilarating moment for me, one that I still fear I may never repeat. In fact, I haven’t been able to write anything since.

In early 2013, I signed a two year contract with a new local budding publisher and my beloved book came to life that October. To celebrate, there was a huge book launch party at a local bookstore (now closed) that was owned by my publisher. I enjoyed a few other minor events last October where I might have sold a handful of copies, and I was invited to speak at a high school this past winter for a week-long writers event where I promoted the book.

Like any other author, I went online and did a Goodreads giveaway and contacted fellow readers and begged for reviews. I even paid for a review service and got a few more reviews on Goodreads. Good reviews make the author feel good, but they don’t always equal sales. My excitement dwindled over time as did sales, and you can only expect a small publishing house to do so much marketing for you. I place no blame for the lack of sales on my publisher. If anything, it’s my own fault.

I gave up caring how well my book did, and that’s a shame because I got excellent feedback from everyone who read it.  And in my own personal opinion, it’s some of my best writing. I did no other marketing for it and had no desire to want to.

I read a blog post that interpreted Emily’s “I am nobody” poem that really connected with how I was feeling about all of this.  The poem reads:

How dreary – to be – Somebody!
How public – like a Frog –
To tell one’s name – the livelong June –
To an admiring Bog!

The writer of the blog post pointed out that most interpret the poem in relation to Emily’s real life. She was a recluse that saw no visitors and she stayed up in her room all the time, shut off from the outside world. She was a nobody. Was Emily mentally ill or did she choose to shut herself in?

Perhaps Emily wrote her poems and expressed herself creatively just simply for the sake of doing it. It was self-gratifying. Just as the poem says, “Don’t tell! They’d advertise!”  She didn’t need acceptance or appreciation from anyone. She didn’t need a pat on the back. She didn’t need the attention. “How dreary to be somebody!”

Now any weird writer these days will tell you they wouldn’t turn down a six digit advance for a publishing contract any day. Sure, they’ll say they write just to express themselves creatively, or some other bullshit, but they’d cash that check. Just dangle one in front of any author I know and see what happens, myself included. Until that happens, if it happens, authors out there hoping at the chance are a dime a dozen.

The book world is saturated with more authors than there are readers these days. Every one of them wants to be read, but not enough of them are doing any reading. And if they are, they are reading the greats and trying to learn something. They certainly aren’t reading each other. Believe me, I’ve exchanged many a review with fellow authors in the past. It almost becomes a game to see how many reviews you can get on Amazon for your work these days. And I think the internet (and Amazon) is partly to blame for making self-publishing so quick and easy.

Believe me, it’s also a very gratifying feeling to see your book on Amazon, to get reviews, to track sales, etc.  I’ll still even review for my fellow author friends but I do it for the sake of reading a good book and providing feedback, and because I know how good those reviews do actually make you feel. We all love praise!

I’ve spent quite a bit of time these past two years thinking about being a nobody, about continuing to write and put stuff out there for the world to find on its own; to do no self-promoting, to just write for the sake of expressing myself creatively and not giving a shit who reads my stuff. But in doing so, why publish it at all?  Emily certainly didn’t have Kindle or CreateSpace at her fingertips. Her poems weren’t found until after she had died.

But part of us wants to be read and hopes to be discovered. Like I said, why else publish at all? We still want feedback. We still need our backs scratched in today’s society of Facebook, Twitter, and the like. What good is creating something if you can’t show it to someone and stand back and say, “Look what I did!”

Part of me finds I did that already. I wrote a book. It was published. I didn’t promote it. And no one (hardly no one) read it. See…I accomplished exactly what I’ve been contemplating the last two years. How does it make me feel?  Not good at all really. Instead, I feel like this poem from Emily…

So what now?  Well, I’ve got a lot to think about. The longer I go without writing, the more I don’t feel the need to. I still feel a need to be creative, but I’ve been exploring other ways of expressing myself creatively which are even more gratifying. But this has been a tough year to pull that off for me.

A part of me feels I will write again, but maybe the world of publishing, the society of readers, will be different then. It changes everyday in the blink of an eye and 140 characters.  Maybe a new day will appreciate Dickinstein as I intended and maybe I’ll feel like giving it to them and saying look what I did.

For now…my beloved book has been called back. (Emily’s last letter to her relatives, written days before she died, simply said “Called back.”) I’ll have her all to myself and we’ll be nobodies together.