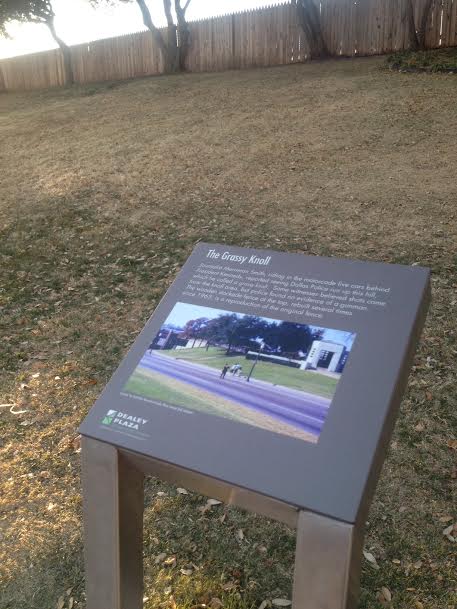 I discovered today that the site of JFK’s assassination was only about a ten minute walk from my hotel. Based on online maps I’d previously looked at, I thought it was at least a quick cab ride away.  It was the one and only thing I wanted to experience and take away from my trip to Dallas.  So before the sun set today, I walked to the grassy knoll.

I don’t really know how to explain it nor my feeling of being there.  It looks exactly like every textbook photo or November timed documentary I’ve scene.  It felt like I’d been there before because I had been in every American history class I took or every November when specials were aired and the event was remembered.  Most of us know the events of that day like second nature or have stared at the Zapruder film over and over again and can play it in our minds from memory.  It’s hard not to when you are standing there and there’s even a marker showing you where Zapruder was filming.

I took several photos, much like everyone else that was standing there in various places as cars zoomed by.  Two X’s literally mark the spot on the highway where the first and second shots hit JFK.  People literally paused in the middle of the road at the fatal second X and smiled for the camera while a red light held back traffic.

My obsession has always been over the conspiracy theory behind the grassy knoll where the second gunman was believed to have fired the shot.  And it’s what I personally believe happened.  I’ve always been curious about what was behind the fence at the top of the hill. And now I know.  It’s a parking lot, now for the JFK museum, still separated by a brown wooden fence lined by a metal fence on the back side. Nothing out of the ordinary, until you approach the fence and discover the graffiti left there by everyone else who shares by belief.  The pictures below are some snapshots of the fence and the view from there.

My favorite, or at least the most poetic reads, “This is where a president lost his life, and this is where a nation lost its mind.”

Took the cover off the pond today and was surprised to find all six of the #roseycheekminnows survived the winter! I added them last September after bringing in all of the #whitecloudminnows. This was the first year I covered the pond. Totally worth it just to see these little guys greeting me today.
I finally caught the little guys croaking on video! #soundon #sparklinggourami #nanofish #nanotank #aquariumhobby #aquarium #fishhobby #tropicalfishtank #tropicalfish #livefishtank #liveplantaquarium
Are you stuck at home and looking for something new to read? All of my books are free on Kindle this week! Link in bio. . . . . #authorsofinstagram #author #writing #writersofinstagram #freebooks #freeebook #freekindlebooks #amazon #kindle #kindleunlimited #goodbooks #goodreads
Finished reading this today. Loved the movie, which was actually a fair adaptation. . . . . #canyoueverforgiveme #leeisrael #goodreads #melissamccarthy
Quarantine got me like... #dogsofinstagram #coronavirus
I gave the #corydoras an algae wafer and everyone lined up for a bite. . . . . #aquariumhobby #aquarium #aquascaping #aquascape #femalebetta #whitecloudminnows #nanofish #nanotank #livefishtank #tropicalfish #liveplantaquarium