After having made it through the work day without snapping a single photo (I lead a pretty boring non-photogenic life), I was on my way home and thinking about what the heck to post for today. I was all ready to do another week-long theme of pics from inside my office (which I’m still going to do starting tomorrow), when I walked in the door and overheard the news reporting on Philip Seymour Hoffman’s death again.

Like many, I first took notice of Hoffman from his minor roles in movies like Leap of Faith, Patch Adams, Magnolia, and Twister. Though it was another minor role, I felt a real connection with him as Scotty in Boogie Nights. And what gay man wouldn’t have respect for him after seeing Flawless! And the memorable roles kept coming in Talented Mr. Ripley, Red Dragon, The Savages, and Doubt.

But it was his 2005 Oscar winning performance in Capote that really made me admire him even more.  The movie was based on Gerald Clarke’s 1988 biography of the infamous author Truman Capote. If you know me, then you know I have a strong fondness for Truman and have had since college when I first read George Plimpton’s book called Truman Capote. My AOL screen name at the time was even TruCap76, for which everyone thought it meant I was a “True Capricorn.”

In reality, I related to Capote in many ways, beyond him being a Southern effeminate eccentric with a funny voice.  I wanted to be Truman Capote. In many ways, I thought I was. And maybe I still am. Truman has been one of my heroes, one of my angels, for a long time, so seeing Hoffman give him life on the big screen was something special to me.  I even took off work on opening day to go to the movie theater to see the film.

I feel sorry for Hoffman’s children and the fact that his death is now a sore reminder of the dangers of addiction and heroin.  Pills and alcohol took Truman from us in 1984, and have also stolen the lives of many of my so-called angels over the years. As a writer from the south, I can relate to the pain and loneliness Truman felt and attempted to cure through self-medication.  I contemplate what prevents me from taking that same path of destruction. Is it the fear or the know better?  I do not know, but at times I have felt it slipping away.

My father is an alcoholic. He’s one bad binge away from killing himself or someone else. It is sad to see him slipping away from us, to recall the respected man he once was, to know that he wants to die but is probably too chicken shit to take the easy way out.  He wakes up to the same demons every day, every transgression he’s committed in life, and the booz helps him forget.

I do not want to become my father, and I’d like to think that’s the reason. That’s the sole reason I haven’t followed those foot steps of the writers I have so admired, my Tennessee’s, my Truman’s.  I am not afraid of how it will make me feel or what ailments it will temporarily cure.  I am afraid of who I will become. Every time I see my father, his hunched over body, his crippled walk, his unshaven wrinkly scarred face, I remember that fear.

So, today’s picture is for Phil.  It’s for Truman. For my father. And it’s for me and the reminder that I hope I don’t become.  It’s a picture of my first edition copy of Capote that I rescued from the bargain basement at The Book House, and the extra copy, the movie re-release with Phil on the cover, that I bought the same day. My miniature Truman doll looks on. He approves. 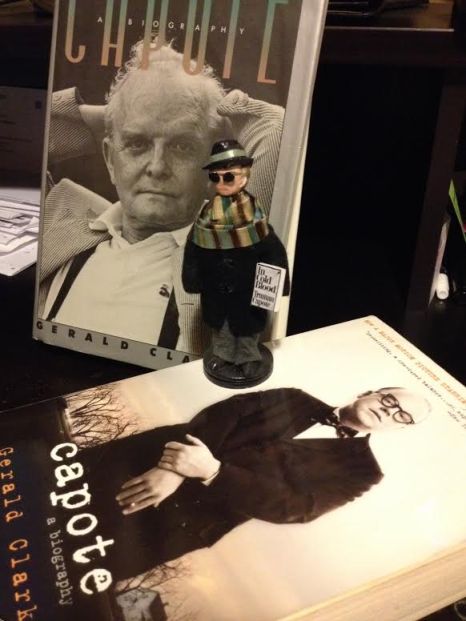