When I started making putz houses this year, my intent was to eventually “make them my own” by creating something unique and different to call my own. Two Pinterest posts quickly led me in that direction. You can see them here and here.

I love the idea of using old sepia-toned photos inside the houses, and using scrapbook paper to build the houses instead of Christmas cards.  Remember my photo of the day from January 11th where I stocked up on old vintage photos from a local antique store?  Well, now you know what I needed them for!

I’m calling these Sepia Houses, for the sake of using the old sepia toned photos as the center. I started by making a pattern that would allow me to use as much of the original photo as possible. I drew it on graph paper and then cut it out and assembled it using tape.

Then, I selected what heavy scrap booking paper I wanted to use for the house and the roof.  I cut and glued the photo to fit inside, glued the house together, and then outlined it in matching glitter.

And I call this first one the Aleta house because luckily, the name of the young lady was recorded on the back of the photo.  She is 14 years old and the picture was taken in Detroit in 1916.  The address is even listed. If you look at the last photo below, you’ll see small windows added to the side instead of being cut out. I utilized scraps from the photo with the handwriting on it to make those. 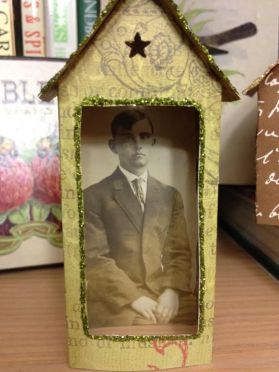 I call this second one the Groom’s Quarters. I cut the photo of the man from a larger photo I purchased of a couple. It looked somewhat like a wedding photo though the couple was oddly not touching each other. Perhaps they were even brother and sister. There was no writing on the back though to help determine their history.

Again, the shape of the house is completely my own design using graph paper. Instead of two contrasting prints of paper, I used the same paper for the house and roof here since this one is much smaller.  It’s outlined in glitter and I used a star hole punch for the embellishment at the top.

Next up was my first special request for a project!  J liked one of the photos I had purchased of two men together and asked that I make a special house for him using it.  He even picked out the paper during our trip to the scrapbooking store yesterday and only asked that the house appear masculine.

I searched Pinterest and my other recent inspiration sites again  for the shape of the house and was inspired by this design at Little Glitter Houses called the Twin Peaks Beach House.  But I designed the shape and size again on my own to accommodate the photo.

This was another photo with writing on the back too!  The two men pictured are named Fred and Chas.  They had different last names so perhaps they were cousins or just close friends.  It’s fun to think about!  So, I’m calling this the Fred and Chas House! Here’s the result which I’ll be trimming in glitter later today:

I have 7 more sepia tone photos so I think I’m going to put the Christmas houses on pause and focus on these for a few more weeks.

And I have more good news!  I’ve opened an Etsy shop if you are interested in purchasing any of my Putz Houses.  All of them that I’ve blogged about so far are there except for the Fred and Chas house.

I always say a gardener's work is never done! Today @jostheun and I made a list of everything we want/need to do for the rest of the year and into next Spring. Lots of maintaining. Lots of new things to come!
A gardener's work is never done! This weekend we built two new raised beds so we can expand our vegetable space next year.
The Zinnias aren't liking the heat too much this year. Still one of my favorites.
Despite the heat, things are still blooming in the garden!