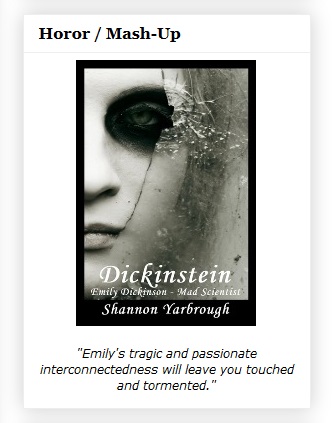 This week I have an ad for Dickinstein running at Indie Author News.

This ad size and its location is called a Gold Ad and can be purchased for a week. You pay the site through PayPal. I believe it was $28, but if you bought two weeks it was just $40.  So, I bought 2.

It’s a nice ad though they spelled Horror wrong at the top. (I did send an email to politely let them know.)  They also chose a blurb from one of my 5 star reviews which I thought was a nice touch.  It doesn’t tell the viewer much about the book, but thank goodness for a cool book cover to catch their eye!

I have the ad linking them to the Kindle version at Amazon, and have been carefully watching my sales rank bounce up and down, hopefully a result from this ad!  I’ll check in with Robin at RHP after the ad is over to see how sales were during these two weeks.

I wasn’t a regular visitor to IAN before but it’s a great site, and I love the amount of space they devote to ads.  Yeah, it’s a lot to look at but at least the ads are nice and big and simple.  It makes for a very clean look on their site.  I know I’ll definitely be back to catch up on all the indie author news.