Book Review: Truman Capote and the Legacy of In Cold Blood by Ralph F. Voss 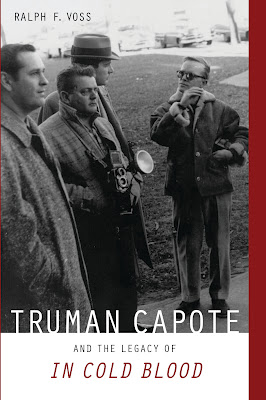 I have been a Capote fan since high school, have read almost all of his work (including In Cold Blood), and have seen both recent films based on his time spent in Kansas (Capote in 2005 and Infamous in 2006).  While researching a project of my own, I decided it was time to read Ralph F. Voss’s book also devoted to Capote and his time spent in Kansas.

While it is a well researched book (30% of the text is Voss’s notes and bibliography), there is nothing new here for readers like me who are already well versed in the topic of Capote’s real-time research of the Clutter murders, the capture and trial of the killers, their execution, all culminating with the publication of In Cold Blood.

I would highly recommend this book to a new person who has just become interested in the topic, perhaps someone who has just finished reading In Cold Blood, but has not seen any of the movies or read anything else; someone who is intrigued and now wants to dive a bit deeper into it. If that’s you, then this book is a gold mine.

For the others out there like me who are a bit more familiar with all of it, you might find yourself bored. Voss’s style of writing reads more like an essay or public speech: “In the next chapter, I will argue this” or “As I stated in chapter 6″ and”I will now discuss this.”  You are constantly reminded of the author’s presence and opinion, which gave the book a rough edge for me.

Another problem is that after Voss pinpoints his lead sources of inspiration (movies and books), he spends quite a bit of time just regurgitating their plot lines and discussing their elements like a book reviewer or movie critic would. Obviously, he discusses In Cold Blood in detail, along with its 1960s movie, the 1990s television remake, the film Capote of 2005, Infamous of 2006, Gerald Clarke’s Capote biography, George Plimpton’s book on Capote; and for some odd reason Kim Powers’ fictional book Capote in Kansas of 2008, and even the comic book version of 2006 – spelling out every detail of how they are different and giving his opinion of how they relate to the real life facts, even though the latter two are complete fiction!  Again, this made for quite a tedious read, filling up pages with information that interested readers might want to find out on their own, if they haven’t already.

Am I glad I read this book?  Yes.  There are several pictures sprinkled throughout the text, some taken by Voss in Kansas which I had not seen before. And, being a diehard Capote fan, I always appreciate hearing someone else’s thoughts on Capote and his “infamous” work. Is there anything new here for fans like me? Not really, but you might want to take a stab at it anyway.