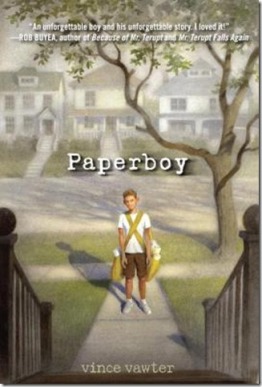 What a wonderful and peculiar little book this is! I was immediately drawn to it because of the Memphis setting. I lived there for 6 years while in college. However, I was also intrigued because the lead character is a young boy who stutters.

The book is written from his point-of-view and in his own personal language as he describes how he struggles to communicate with his peers, parents, and other grown ups. I, too, have a speech impediment which caused me great isolation in school, so I could easily relate.

The boy, who remains nameless until the end of the book, takes up his friend’s paper route while he is on summer vacation. On the route, he worries about having to speak to his customers. He befriends an older man who takes the time to get to know him and shares stories with him. He witnesses a lady who has a drinking problem and odd situations in her household. The boy also has problems with a junk collector who steals from the boy. There’s a lot going on in this book, but such is the life of a young boy his age.

We also see interactions with his parents, and an unusal conflict involving the boy’s father. The boy is very close to Mam, the family maid, because she also understands him and communicates well with him. And we share his love for baseball; he has an excellent throwing arm! The book takes place in the late 1950s so we get a glimpse into the racial tensions of that era through the maid’s eyes.

This book will frequently tug at your heart strings. It is written in a kid-friendly format with no quotations or commas (The boy explains why in the book!). Though the book is for ages 10 and up, I gave my copy to a coworker whose grandson is only 5 and has speech problems. I suggested she share it with him one day. This is a great book for any kid who has felt bullied or isolated because of an impediment. I highly recommend!