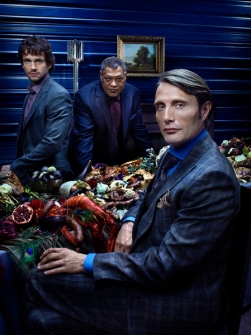 And by survive, I mean in the ratings to see another season.  Hannibal, the TV series, premieres tonight on NBC with Mads Mikkelsen in the lead and I can’t wait to see it! Other than Laurence Fishburne and maybe Scott Thompson, this is a lesser known cast. However, just pop over to the IMDb page for the show and click on their names and you will find that you’ve actually seen several of them in other well known movies and rolls. Bryan Fuller, the creator of the show, has a tendency to use lesser known, but high caliber, actors in his work. And they always shine.

For those who know me, you know that Thomas Harris – the creator of Hannibal Lecter and the author of the series – is one of my favorite authors and the Hannibal books are some of my all time favorites. I frequently quote lines from Silence of the Lambs in casual conversation for a laugh.

If you have seen the film, you know Dr. Lecter only appears in about 20 minutes of it and he’s already behind bars. His terrifying past is only alluded to.  Granted, you get to read more about it in the book, but it’s already happened so Harris leaves it up to the reader to fill in the parts we don’t know.  And it’s those parts that we don’t know that can be quite terrifying and which turn Hannibal into a monster.

But we have to remember that while he was committing his horrible crimes, he was also a very smart and sophisticated doctor. He was a rich playboy that every one admired and looked up to.  He helped the FBI profile other serial killers. And yet, he was also insane and a brutal cannibal killer himself.  And that’s the intensity that will feed this show.

You can’t go wrong with Bryan Fuller in the captain’s seat either.  The man is a genius.  BUT…he does have some horrible cloud hanging over him because every show that he has created has been canceled early on, despite being brilliant – Dead Like Me and Pushing Daisies are prime examples.  I LOVED both of them and watched both of them die. It’s hard not to accept that Hannibal will probably receive the same fate, though NBC has greenlit a full 13 episode first season.

You also have to accept that Hannibal only killed several people – not hundreds. So he’s pretty much going to become a secondary character again as they stretch his storyline out. Instead the light will shine on Agent Will Graham, played by Hugh Dancy, quite a bit and the numerous killers he will chase down with Hannibal’s help. You probably remember Ed Norton in this role in Red Dragon, though true fans will think of William Peterson (CSI) who gave birth to the role in Manhunter.

No matter what, I will be watching and I’d bet money it’s going to be great and it’s going to get great reviews.  At least I hope it will. But whether or not it sees a second season?  I just don’t think that will happen.

Ooooooh! Weeeee! If you ain't drankin' dis you ain't drunk yet. @chrissysbuck you tried this yet?
A lazy Saturday. #dogsofinstagram #saturdayvibes
I love you more than my luggage. This one really hurts today.
I added a few #medakaricefish to the tub this morning. Spring is finally here! @msjinkzd
First iris of the season.
I heard a Who this morning, @lannybis