Impartial Musings of the Uninspired: Lions and Lambs 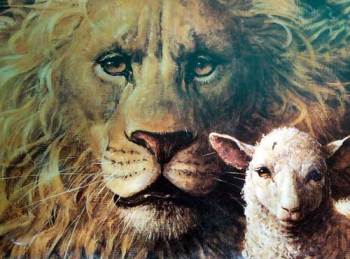 What’s that old saying about March?  I believe it! It’s the main reason you haven’t heard from me here on my blog in a while.

On February 22nd, I drove to Kansas City for my first trade show for work.  I’d been preparing for this show since last November, but of course, the last few weeks leading up to it were still crazy busy at work.

It snowed here in St. Louis the day before, and Kansas City got twice as much. The roads were clear getting there, but still, seeing all that snow didn’t help headed into this business trip. And then there was concern on whether or not people would show up to the trade show.

After a 12 hour set-up day on Saturday, I was so tired I went to bed without dinner. The show lasted three days, and despite the weather, people came. And then some vendors started pulling out early on Monday because…you guessed it…it snowed again Monday night!

By Tuesday afternoon when the show closed, I was exhausted.  I was tired of standing on my feet all day for four days. I was tired of snow. I was tired of hotel food. I was tired of not being able to sleep because I was too tired. And we still had to pack up! I slept well that night, but probably because my body knew it was over and I’d get to go home in the morning. It was snowing the entire drive back, but I finally made it home at about 1:30pm Wednesday afternoon to the ground still covered with snow and it snowed off and on for the next two days in St. Louis!

Spending five days in a hotel was exhausting, not to mention the show itself.  It was the first time I had ever actually unpacked my entire suitcase. Despite being the Marriott, I was shocked at the quality of breakfast food. The hotel restaurant, lounge, and room service all served the same thing – equivalent to a Denny’s all you can eat menu.  Convention Center food at the show wasn’t much better – $3 bottled water!

But the show was a success nonetheless. I took a nice nap when I got home and slept like a baby that night. Back to work on Thursday to start processing trade show orders. My feet still hurt, and I think it took two days before they started feeling normal again. But it was a short week at work and the weekend was finally here!  I didn’t even leave the house or get dressed on Sunday, and boy did I need that!

Being “in the zone” not only takes a toll on your mind and body, but I felt like I was under a dome and separated from the outside world (Yes, that was an SK reference!).  It took some time to get acclimated to going back to my old schedule. I picked up my Kindle and started reading again – it was hard to relax and focus in KC on anything but work. On Sunday, I picked up my own book and started editing again – more about that later.

And just when I think life is back to normal, guess what?  I get to do it again in a few weeks.  I fly to Orlando for 4 days in two weeks for the next show!  This one is much, much smaller though and won’t be quite as intense.  But most of all?  No snow!  It’s in Orlando.  I’m staying at the Peabody. The show is only two days. It’s a fourth of the size of the last one. Warm weather. And again…no snow!

I just pray that when I return the grass will be green and flowers will be blooming. I hate winter. I hate traveling during winter. I’m definitely getting spring fever too.  Maybe this “spring break” trip to Orlando, even though it is for work, will really get things started. After all, daylight savings time is this weekend. It’s supposed to be 60 degrees on Friday. The snow has already been melting away. Oh, and I don’t want to have to be wearing a winter jacket when I get on that plane to leave St. Louis!