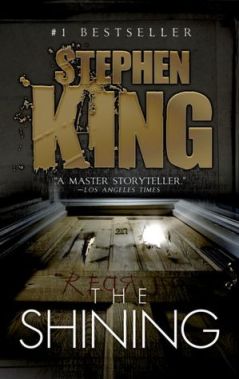 First published in 1977, The Shining was only Stephen King’s third book and first hardcover bestseller.  It was also his second book to feature a writer as the lead character. I was first introduced to King in the mid-90s and spent many a summer reading his books back to back. The flame was relit last year when I decided to start collecting his books in hardcover again and picking through the ones I’d missed out on over the last decade.

I have to admit that The Shining is not one of my favorites.  I only chose to read it now because a sequel featuring a grown Danny is due out next fall called Doctor Sleep. As soon as I heard about it, I knew I wanted to read it but knew I needed to read The Shining first.  Now, I’m not so sure.  Of course, Doctor Sleep is sure to sell thousands upon thousands of copies and become an instant NYT bestseller.  Too bad Stanley Kubrick isn’t around anymore (Kubrick directed the movie version of The Shining).

Though I’ve never seen the movie of The Shining all the way through, I don’t have to dwell too much into the book’s plot to let you know what it’s about.  You’ve either seen the movie, or know enough about it thanks to its place in pop culture to know what it is about. Though I do know Kubrick purposely changed quite a bit for the screen, chances are he made it better.

In the book, King offers very little history on why the Overlook hotel is haunted, or why it has such an ominous effect over its off-season caretaker.  It’s just a bad place. And though the haunted hotel is indeed the lead character driving the story, the book really isn’t about the hotel at all.  It’s about Jack Torrance and his son Danny.  Jack is a failing teacher, recovering alcoholic, and wanna-be writer – all traits one could use to describe King in the 70s. He was writing what he knew, no doubt.  Danny is a boy who suffers from “the shining,” the unique ability to see things that aren’t there – sort of like a medium, but sort of different.

All we really know about the hotel is that a lady killed herself in Room 217, some gangsters killed a couple of people there, and something might have gone wrong at a masked ball held there a long time ago.  Oh, and the previous caretaker killed his wife and daughters and then offed himself there, but they are not ghosts here.  That’s it.  Add to this some animal shaped topiaries that move around on the lawn and will attack you, which was a pretty creepy detail, but that’s it.

There are some intense moments where the elevator is operating on its own or Jack hallucinates having drinks at the bar, but still no real history into the hotel despite Jack even trying to find out on his own when he comes across some documents in the basement. Ultimately, all of this somehow drives Jack insane (along with the reader), which scares his wife Wendy, and upsets little Danny. Spell murder backwards (REDRUM!) over and over and over again, and you’ve got yourself a book.

Now, I will give King credit where it is due.  After all, this was only his third book at the time. King excels at writing good characterization.  He still does today. Right from the start, you are in Jack’s head and that’s where you stay as his mind spirals out of control.  And ultimately, Jack’s character is what drives this book. Not Wendy. Not Danny. It’s all about Jack.  And how ironic that an over-the-top actor named Jack in real life would play Jack in the movie!

The story itself reminded me of some of the weaker Koontz books I’ve read.  Yep, Koontz.  We have a genius idea that would make one hell of a story, but only ends up letting down our expectations because the writer just didn’t take us where he could have. At 600 pages, this was also King’s largest book at that time.  We know from the lofty tomes he’s written since then that he let us down by about 200 pages at least!

So, while it is a classic and remains a part of pop culture history thanks to certain cinematic elements, I’m glad I can now say I’ve read it.  I will read the sequel as well next year.  But… it’s not one of my King favorites when it comes to horror.