Was That Not What It Was? 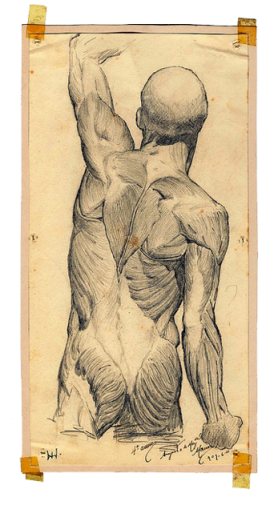 My blog has been lacking lately because I’ve been busy writing a book, but today I found myself with some time to write and so I wanted to tell you about a strange ailment I’ve been suffering from since July. I started having a strange pinching pain in my left side.  I checked myself for lumps or bruising, but found nothing.  I assumed for a few days I had just slept wrong and was experiencing some back pain.  After a few days, I noticed the pain would worsen and become very uncomfortable for me after lunch at work.  I decided to go see a chiropractor assuming it was a displaced rib.

The chiropractor determined it was not a rib problem, but he isolated the pain by applying pressure to parts of my side and ribs.  It almost sent me through the roof.  He wanted me to come back and try massage or acupuncture, but I decided to go see my primary care physician. My doctor ruled out all of my worries – thyroid, hernia, pancreas…there’s pretty much nothing on that side of your body other than intestines. He sent me to get a chest x-ray and gave me a prescription for Naproxen. I was familiar with this drug because I took it last year for some foot problems I was having, and the same doctor had given me another prescription for it earlier this year for my foot as well.  The chest x-ray showed nothing abnormal.

It was not easy to tell if the prescription was working or not.  After sleeping on my left side, I’d wake up feeling almost as if the pain was gone.  By lunch, it was back again.  And by the end of the work day, it was practically killing me.  I upped the drug to twice a day and it seemed to be helping with the pain but the strange pinched feeling was still there. I had my prescription refilled and decided to wait till early September when I had a follow up appointment scheduled with my doctor already which was just for wellness.  I told him I still had the pain in my side and he sent me to get a rib x-ray. That came back normal as well.

So the next step was to go see a pain specialist this past week. After describing the pain in great detail to a doctor who didn’t really seem to care much, he examined me and had me bend in a few areas, checked my reflexes, and then had a nurse hand me three prescriptions – and one of them was for NaProxen again despite me telling him that it wasn’t working!

You can understand my dismay here.  Was the pain specialist even listening?  He didn’t even ask me to come back.  The nurse told me just to call in 30 days and schedule a follow-up if needed!  Needless to say, I was not happy.  I felt like I was just being pawned off with some pain meds.  The doctor did say he thought it was damage to the tissue between two ribs, but I haven’t done anything to cause that damage.  So, how did it happen?

The other prescriptions were for Gabapentin and Amitriptyline. After reading up on them, I discovered one is mainly used for someone experiencing seizures, and the other is an anti-depressant.  Oh yeah, and they are sometimes used to treat various bodily pain.  I take Gabapentin once a day for three days and then increase the dosage to two for three days, then three, and then four.  Amitriptyline is just to be taken at night before bed.

I started these drugs Thursday night and I could definitely feel their effects when I woke up.  I felt like I was floating on air most of the day.  I also felt so carefree and wanted to dance.  I took them again Friday and Saturday night, and oh yeah, they definitely help you sleep.  During the day this weekend, I felt numb.  Almost the feeling you get after a nice shot of bourbon, that tingly feel-good sensation.  Today is the first day I start taking Gabapentin twice and as I am typing this very blog post, I feel woozy. I have no idea if I can make it to four times a day.

But I still have the pain in my side!  When I was having the x-rays done both times, when I left I told the tech I hoped they found something.  The tech corrected me and said they hoped we didn’t find something.  That made me very angry.  At this point, I don’t care if it’s a baby alien growing inside me.  At least I’d know what was causing the pain. For someone who is fairly healthy, has no high blood pressure or cholesterol problems, may be a few pounds overweight, but has never spent anytime in the hospital and rarely gets sick for a long period of time, to suddenly have a constant ailment is reason to worry.  I just want the pain to have a name, or I want to know what is causing it.

To be dismissed my nonchalant doctors and just handed prescriptions for pain meds concerns me.  To date, I’ve spent $110 dollars in copays and $50 in prescriptions for a pain that isn’t showing any signs of going away. So now what?

I’m going to continue the pain meds for now and see what happens over the next thirty days, but I probably will not return to the pain specialist.  I’m almost ready to consider alternative therapies, maybe even returning to the chiropractor and trying the massage or acupuncture. But to be suffering from a pain and not knowing what it is has been very disheartening these past few months. I’ve also felt like I’m suffering from the quality, or lack thereof, of healthcare in our country. For someone like me who can afford healthcare in this country, and has not really had to use it much in life, now that I am finally using it I definitely don’t feel like I’m getting my money’s worth.