How To Write Your Novel In Eight Weeks

At first, I thought I should call this post: WHY I LEFT FACEBOOK AGAIN!, but since I’ve done that before (in mid-June I left FB for the 3rd time now!) and wrote about before, I thought something a little more informative was in order.  I’m going to tell you why I left Facebook, but the reason behind it is much more important.

I left to write a novel.

Yep. Plain and simple. You might think it’s easy to write if you just leave the internet alone for a while. After all, it will be there when you get back. But for me, it was easier to step away and distance myself from everyone’s drama, catty misspelled cell phone posts, minute-by-minute updates about how bad your day is going (“Is it Friday yet?”), and petty needs to be “liked.” (Cause gosh darn it, people like me!) When I’m not checking in to see what everyone else is bitching about, or composing bitches of my own, I discovered I get a lot more done. 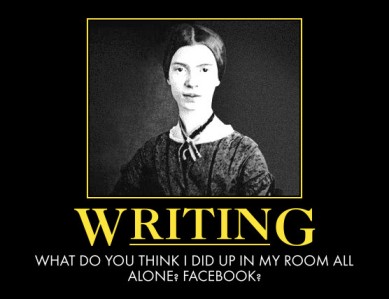 Now each morning I check my email. I check my bank account. I check my book sales. And then I’m done. Three tasks that each take about one minute of my time, leaving me with more time to write! Call me anti-social, but call me a writer! I’ve always said it was a lonely task, but I couldn’t be happier when I’m actually getting it done.

Sadly, I’m not going to tell you what this book is about.  Not yet. For me, writing a book is like a lover I’m having a secret affair with. The fewer people who know the better! I want that excitement all too myself. Call me selfish, but yep, call me a writer!

When I decided to quit Facebook and devote more time to this project, I hit it head on and man, I hit it hard. I committed to writing 10,000 words per week and I set my goal at 80,000 for this project.  Yep! That means I’ll finish my first rough draft in just 8 weeks. As of today, I’m on target to reach 40K by Saturday – the end of week 4!

So Rule #1 is easy.  People say they don’t have time to write. Well, you have to make time, even if it means leaving Facebook. Where do you start? With a blank page and a word or two.  I write twice a day: before work and before bed.

Rule #2: Set a goal and stick to it!  In his nonfiction book On Writing, Stephen King says he likes to try to write 2,000 words a day. Often more, but never less. If you do this, you can write four books a year: one per season, 180,000 words each.  You’ll cut most of that in rewrites, but that’s okay. If you cut half, you are left with 90K and that’s a good sized novel. I’ve always followed his advice, or at least tried to when it comes to setting a goal.

So, set that word goal and get busy.  I used to try a daily goal but would often beat myself up if I didn’t hit it. So, with this book I set a weekly goal instead and it’s working out just fine. I have seven days to get there. If I get there early, good for me! I keep going! If you divide up that weekly goal by each sitting, that’s roughly 700 words each time I sit down to write.  Sometimes I reward myself when I’m on target by stepping away and doing something else. Most of the time I keep going till it’s either time for work or time to sleep!

To make it fun, I keep track over on the right side of my blog over there and even have a nice little count down to when I should be done. LOOK OVER THERE —->

Rule #3: Jump around!  I don’t mean physically jump around (unless it’s the end of the week and you reached your word goal two days ago). I mean don’t be afraid to jump around in the storyline. In the past, and on two previous published books, I was a fan of writing straight through. I started on page 1 at the beginning of the story and wrote straight through. I never skipped around and never wrote out of sequence.

I started that same format with this project. But after the first 20K in words, I realized I was losing steam. I knew how the book was going to end, but I was at a loss on how to get there. So, I skipped ahead and started writing the big climax. Now, 34K later I’m almost to the end.  And by doing this, I have a pretty good idea of how the middle part of the story is going to go when I get back there.

So there you have it!  That’s what is working for me right now.  Sure, there are other logistics to work out in your favor. You’ve got to have a pretty good idea in mind.  You’ve got to know where you want to take that idea…plot development, dialogue, character development, and all that jazz. I could feed you motivational posters all day long that sound good and pretty, but are you listening?  Nah!  Just don’t give up!

And Don’t worry!  You’ll get there.  Just don’t set yourself up to fail and don’t get disappointed if you do. Some of it you won’t even figure out till you sit down and write. And that’s usually the best writing you’ll do.

So get to it! Sit down, set a goal, and get writing!  Or come back here and root for me while I do it!