The Secret History by Donna Tartt 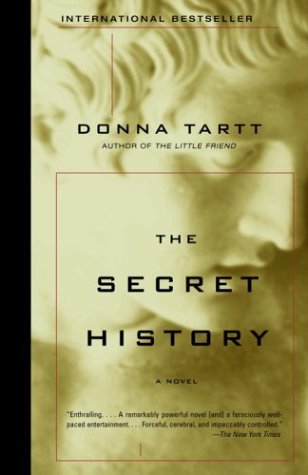 The dead appear to us in dreams, said Julian, because that’s the only way they can make us see them; what we see is only a projection, beamed from a great distance, light shining at us from a dead star…

The Secret History by Donna Tartt is one book I’ve quite literally obsessed about reading for the last 10 years.  I picked up a hardcover copy back in 2000 in a bookstore in Mississippi and I think I began reading it years ago but put it down.  I’ve heard a book picks you and you’ll know when its the right time to read it. Finally, last month, I decided it was time to read it from start to finish and I’m so glad I did.  Its definitely a book I will ponder again and again, but I still haven’t decided just how much I actually liked the book. It certainly has its flaws, and most of that comes from my poor attempts at wanting to care about any of the characters.

Our narrator is Richard, a teen from California who moves to the East Coast to go to Hampden College in Vermont.  He likes Greek and works his way into a small elite course with only 5 other privileged students who are mentored by a superb and private Classics teacher named Julian.  Richard doesn’t come from a wealthy background like the other five students, but he does a decent job of getting them to believe that he does. The five students are Henry, the snobby leader of the bunch; twins Camilla and Charles; Francis, a homosexual; and Bunny, the loud bumbling nuisance of the bunch who is a bit of a mooch.

The first part of the book is mostly a character study as we join Richard in day to day activities on campus and see his detailed observations of the others…they spend days at their off campus rental home, they take expensive trips to Italy, they study foreign languages, they drink, they do drugs, they verbally back stab one another… We soon learn that they, without Richard, have accidentally killed a man, and may have to kill one of their own in order to keep the secret. They last part of the book is the out of control spiral and disintegration of the pack as they worry about getting caught, and rifts form between them.

Though I haven’t read him, Tartt’s masterpiece has been compared to the books of Brett Easton Ellis in that we have a in depth look at wasted privileged youth at an uppity college in New England, the setting and theme of much of Ellis’s work.  I think this comparison comes easy also because Tartt and Ellis both went to college together at Bennington. Knowing Ellis’s background, themes such as this probably come easy to both of them.

Right from the start, we know that Richard is different from the rest and we are to believe that he is an outsider; I wanted to like him so much and trust him throughout the novel.  But, he blends in so well with the group and does a good job of fooling them, that while the dividing line is practically invisible its still hard to connect with him because he is so much like the others who are at times crass and just unlikable. We get an in-depth study at his relationship with each of his five friends and their thoughts about the others as they are unveiled to Richard, which sets up almost all of the emotional conflict that drives the book.

At times, it was indeed a very slow read.  There’s little action, and Tartt relies on the “fear of beauty” and the unsteadiness of teenage mental psyche to create the layers of her story.  And oh what layers there are!  I don’t regret reading this book at all, not in the least bit.  But I would be hesitant to suggest it to others.  I’d really have to know that person well and know what they like to read.  I would suggest approaching this one with patience.  You will be rewarded in the end with the book as a whole, and all good things comes to those who can wait.

I do want to read Tartt’s other book, The Little Friend, even though its longer than this one.  And she’s also turned me onto to wanting to read Ellis.

Dickinstein, my mash-up of the life of Emily Dickinson with the story of Frankenstein, is now available in hardcover! #emilydickinson #frankenstein #mashup #goodreads #hardcover #newbook #amwriting
This is Kathy. She's been my "work wife" for the last twelve years and we've eaten lunch together almost every work day during that time! Today was our last lunch together at work. After 17.5 years at my current job, tomorrow is my last day! #friends #workwife #thankyouforbeingafriend
My new book, THE ANSWERS YOU SEEK, is now available for preorder from @dreamspinner_press
Thank you for being a friend. #goldengirls #bettywhite