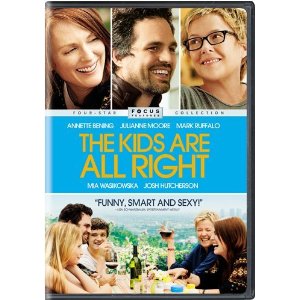 I honestly had no idea what The Kids Are All Right was about based on the few trailers I’d seen of it, but it looked good enough to want to watch it.  And I love Julianne Moore no matter what she’s in.  Then, when it got nominated for Best Picture, Best Actress, and Best Supporting Actor I knew I wanted to see it no matter what.

It’s the story of a lesbian couple, Nic and Jules, played by Annette Bening and Julianne Moore who have two kids – Joni and Laser.  They are a close family.  Joni is 18 and this is her last summer at home before college.  Laser is 15 and enjoys sports and hanging out with his best friend.  Nic and Jules are still in love with each other and seem to have the perfect marriage and family until the kids locate the man who was their sperm donor.  He’s a cool grungy guy named Paul, played by Mark Ruffalo, who runs a restaurant and an organic community garden.

The kids like Paul and want to connect and hang out with him.  There are several awkward moments, as there should be, as they search for things to talk about and Paul honestly tries to learn about who “his” kids are.  Nic, the dominant one of the two Moms, decides they should have Paul over and meet him too.  But it’s the chemistry between Paul and Jules that is about to turn everything upside down.

This is a stellar cast.  I loved Josh Hutcherson as Laser.  He has some excellent scenes that show a lot of heart and emotion, such as playing basketball with Paul and asking if he’d rather be buried or cremated, and Paul asks him if he prefers Nike or New Balance.  Paul shuns his “cool” friend Clay for wanting to urinate on a stray dog that wanders by, then the two trade punches in the face.  Joni, played by Mia Wasikowska,  also has her classic moments too – picking vegetables with Paul and getting a ride home from him on his motorcycle, even though her moms hate motorcycles, or playing scrabble with her “boy” friend while her sex crazed girl friend drools over jocks in the yearbook.

The only problem the movie has is its lack of intensity when the conflict is finally out in the open.  We build to it with intensity, but then are let down a bit by the outcome. Each character quickly deals with it in their own way, and then the movie is just pushed forward to its obvious heartfelt end.  But overall, I still loved the movie.  I was totally caught off guard by it, and that made me appreciate it even more.  Too bad Moore missed a nomination, but the other awards are much deserved!