Brothers and Sisters…gay characters are boring!

Most like to think that ABC’s hit drama, Brothers and Sisters, got gay life right. Matthew Rhys plays the stiff gay lawyer brother who can’t seem to make a relationship work. Last night’s episode of him taking his older sister (Rachel Griffiths) to a gay bar for karaoke night to prove to his on-again off-again on-again boyfriend’s friends that he wasn’t a stiff had me rolling my eyes and getting pissed. His sister stole the show with her drunken parody of “Believe” by Cher, a great metaphor for the divorce papers in her desk she was hesitant to sign while her brother sat there all sad cause Sis was stealing the show.

Kevin Walker, Rhys character, is the real life boring sap you’d intentionally forget to invite to the party because he’s nothing more than a suit.  He’s a good catch whose seen Wicked one too many times, but he’s afraid to commit. At least they have managed to work in some M2M kissing, but hell, even that’s tame for television these days.  Even his uncle’s slow developed coming out story line is being dragged on forever and losing momentum!  The writers obviously opened a can of worms to keep gay viewers interested, but they have no idea how to fish. Come out already and kiss somebody!

Real life or not, Kevin Walker is boring and I’m not sure that makes for good television amongst gays these days.  Remember Queer as Folk?  Hell, I oogle over The Janice Dickinson Modeling Agency show for its scantily clad man candy these days.  Sad, isn’t it?

Don’t get me wrong.  Brothers and Sisters is a great show and has definitely kept me as a viewer despite its weak gay storylines.  Sally Field is awesome.  I wish Rob Lowe would stop playing political characters, but Dave Annable and Balthazar Getty make for some good ABC eye candy, don’t they?

For now, I’ll continue to watch Will and Grace reruns on Lifetime and reminisce of the good ole days when television was giving me gay characters I cared about that were not too above being real-life, but were at least real characters I’d want to be friends with, not real life boring cock block lawyers. 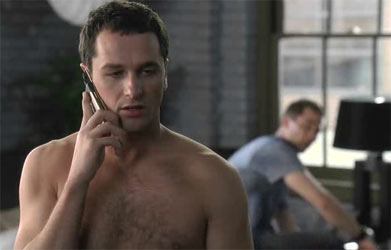